Located 10 km south of Capertee on the Mudgee Road is the hamlet of Ben Bullen. While never a large village, it was certainly a more vibrant community a century ago when it had a flourishing local mining and agricultural industry. In 1909 two new residents were Annie and George Crossman who were employed by the New South Wales Government Railway. Writing as Mrs George Crossman, Annie wrote of her impressions of Ben Bullen to a friend in her home town of Penrith which was later printed in the Christmas edition of the Nepean Times of 1909. Her published letter gives us a wonderful snapshot of Ben Bullen in the years leading up to the start of the Great War.

I arrived here nine months ago on the 17th of this month. I have found the work at post office and railway station agreeable and pleasant, and the people are genial and affable, very generous in thought and action. They are principally sheep-farmers. There are some splendid orchards in the district, apples and pears being the principal fruit grown. Last year there was a splendid crop. I’ve seen one man alone send away two tons of apples daily in the season. Then tomatoes and potatoes are plentifully grown. This year, however, there is a failure in nearly everything, the late frosts, which lasted up till last week, having cut up fruit of all kinds, and the corn, tomatoes, peas and beans are nearly all destroyed, and the continued dry weather is drying up the grass and all vegetation, and water is getting short.

The strike has upset things a little. The timber-getters are thrown out of work, as they were getting timber for the mines at Lithgow, Cobar and other places. Hoskins’ limestone quarry is not doing much, the lack of coal hindering them from running their engine to the quarry and bringing the limestone to the station. They were short of water at first, but they soon sunk for a spring, cutting a hole about 7ft deep and 9ft across, thus getting plenty of water. Hoskins soon had a pumping engine at work. They have constructed two large dams, but we have not had the rain to put water in them sufficient for pumping purposes. The trains are not running regularly. The mail train is running only three times a week, passenger trains have stopped altogether, and the daily mixed train is only running three times a week. The people have not got used to it yet, and, of course, there is a little discomfiture, as there are no shops or stores of any kind here, the people getting their goods from Wallerawang, Lithgow and Sydney daily. But now they often post their letters the wrong day for the mail, and sometimes come for their goods before their letters have left Ben Bullen. They get their meat from Rylstone by the mail train on Friday nights.

Ben Bullen has no hotel, consequently the young men are not seen standing around public house corners holding up verandah posts; neither do they obstruct the footpath, for there are none. The roads are very fair. There is only one church here, a united one. Only the Church of England and Methodist people avail themselves of the privilege of holding services in it, however, and as the preachers are a long distance off we don’t get service every Sunday. The Methodist minister’s home is at Rylstone, and the Church of England’s at Capertee. Ben Bullen church people have provided themselves with a new organ last week – a very nice one indeed. It has a lovely tone, and the people delighted with their newly-acquired property. Several young ladies are talking of taking lessons, so that the organ may not be idle for want of players.

Though things are going pleasantly and well here, yet I often long for home, and Penrith is home to me – a home that will ever be dear to me for its many years of association and many dear friends that I miss here; and also I have several dear ones at rest lying there too, so Penrith will ever be home to me.
Posted by Silas at 22:29 No comments:

There are few people who can claim to know the Capertee Valley so well over such a long time. One such person is the landscape artist Leonard Long who was born well over a century ago in 1911. Although never a local resident Long has visited the Capertee Valley many times to paint during his long art career.

Long first painted in the valley in the late 1940s and his first images from the area were exhibited at the 1949 annual show of the Royal Art Society in Sydney, and he has painted in the area several times since.

The son of a baker, he was born in Summer Hill, Sydney on 25th April 1911, but was raised in the Southern Highlands of NSW where he showed an early aptitude for art. Despite his artistic talent he later became a watchmaker and moved to Nowra in the Shoalhaven. In 1955 he sold his watch-making business and became a full time painter. In 1980 he moved to Melbourne where he now lives. In 2011 he held a centenary exhibition of his work, a rare achievement for any artist.

Leonard Long has painted all over Australia and elsewhere in the world. A career highlight was when he painted with the Aboriginal landscape painter Albert Namatjira. Long is part of the outdoor painting tradition which his often called en plein air painting, an artistic technique where images are created outdoors in front of the scene rather than making images in studios from preliminary drawings or photographs.

On behalf of the people of Capertee we wish Mr Long well in the final years of his career. He can be rest assured that his is fine images of the Capertee Valley have added to the artistic heritage of the region.

Postscript
Since writing this piece we learn of the death of Leonard Long on 3rd November 2013, he was aged 102. He lives on through his many paintings


Capertee Heritage is pleased to host a series of wildlife guides written by Peter Ridgeway for the Hawkesbury-Nepean Catchment Management Authority. As well as this excellent publication look out for Peter's guides on Capertee Valley Frogs/Reptiles and also Birds.


Capertee Heritage is pleased to host a series of wildlife guides written by Peter Ridgeway for the Hawkesbury-Nepean Catchment Management Authority. As well as this excellent publication lookout for Peter's guides on Capertee Valley Birds and Mammals.


Capertee Heritage is pleased to host a series of wildlife guides written by Peter Ridgeway for the Hawkesbury-Nepean Catchment Management Authority.As well as this excellent publication lookout for Peter's guides on Capertee Valley Reptiles and Mammals.

One of the artistic highlights of the Central Tablelands cultural calendar is the annual Portland Art Show. Early this month saw the 38th annual exhibition of the Portland Art Purchase Society which was held at the historic Crystal Theatre. Although gloriously old fashioned this popular non-elitist festival reflects well on the community of Portland and surrounding district. Congratulations must go to the organisers, volunteers and sponsors of this wonderful event. For those who didn't enter this year, there is always 2015. 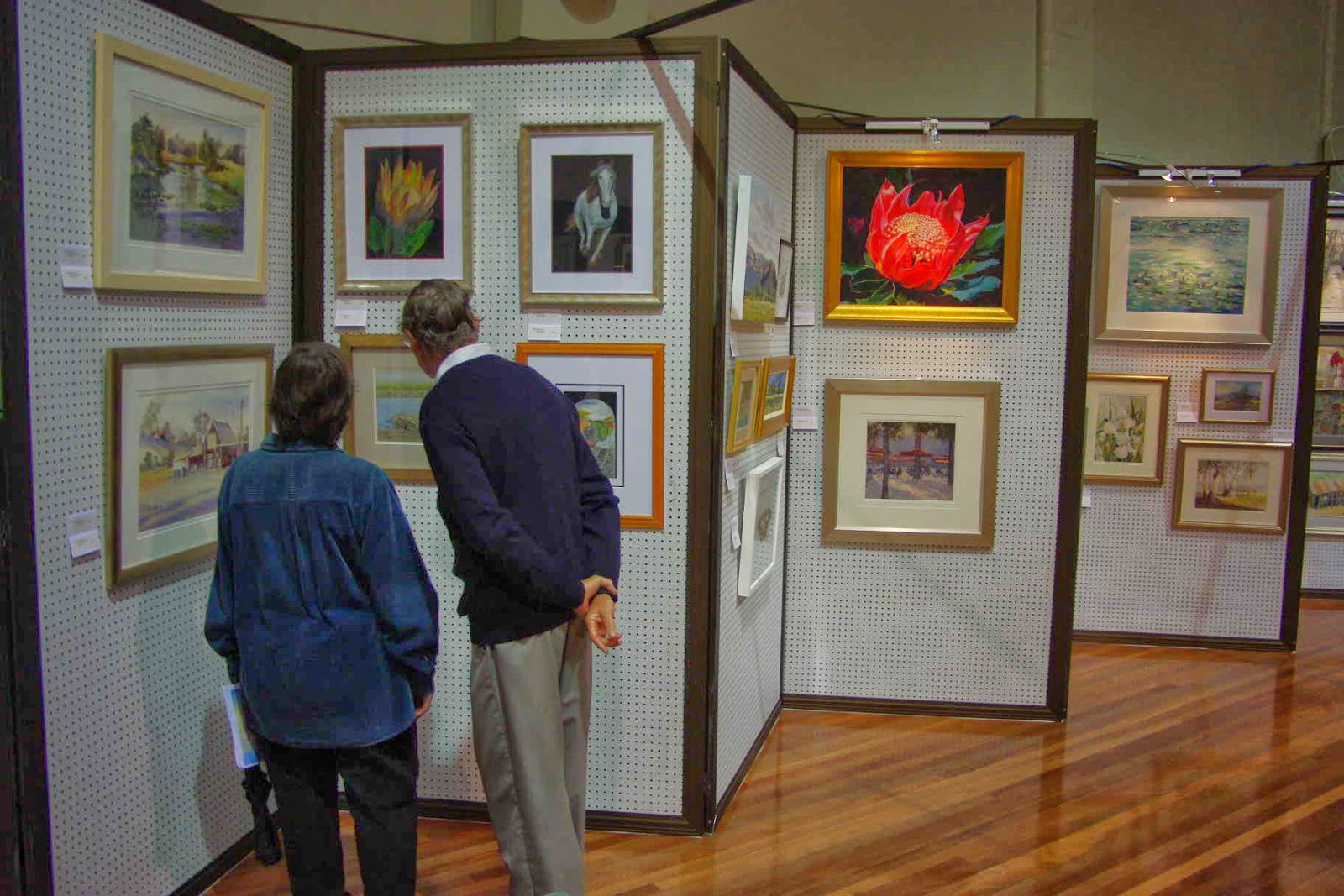 With over 300 paintings on show there was something that would appeal to most tastes although as with similar events there were a handful of weak works. Nearly all the images were in the realist tradition and as usual Plein Air (or outdoor painting) was much in evidence. There was a special focus on images of Portland and the surrounding landscape. Sadly, there were too few images of the area while there were many views of exotic overseas holiday destinations -perhaps a reflection of greater wealth in the area.There were some fine studies of the Capertee Valley by several artists including works by Trish Bennet, Anne E. Smith and Peter Whelan. There was also a lovely study of the Newnes Hotel by Robert Keen. Hopefully next year there will be more images of our district.

Flower painting was much in evidence this year and the exhibition highlighted the work of Wanda Driscoll, an artist who works in watercolour and oil. Driscoll’s high key palette found several admirers when I visited the show. Overall my favourite works at the exhibition were Doreen Shaw’s gouache In Farming Circles, and the amusing watercolours painted by Melody Stewart. Sadly there was no Peoples Choice vote this year. If there had been, my vote would have been for Debra Balloch’s fine oil Beyond My Garden, a well observed angular treescape which broke away from the clichéd gumtree painting style.
Posted by Silas at 23:44 No comments:

The Railway Guide to New South Wales (part one)

The expansion of the New South Wales railway network led to the NSW Government publishing the The Railway Guide of New South Wales: for the use of Tourists, Excursionists, and Others in 1879. Further network expansion led to an updated illustrated edition in 1884. Below we read the first entry on the partially opened section of the Wallerawang to Mudgee branch line. At the time of writing the end of the line was at Capertee.

There is now in progress an extension from Wallerawang to Mudgee, a distance of about 85 miles. In May, 1882, a section of this line from Wallerawang to Capertee, a distance of 22 miles, was opened for traffic. The line passes through very rough country, the scenery resembling that passed between Mt. Victoria and Emu Plains, and in the vicinity of Capertee are some views that are unsupassed by the most noted on the Blue Mountains. Of the views near Capertee may be mentioned the Crown Ridge, a lofty and rocky mountain, from which a magnificent view is obtained; the Gorge, the rocks here resembling the rocks at the entrance to Port Jackson; and the Capertee Caves, interesting on account of the many impressions, apparently made by human hands, on the sides and walls. A great deal of traffic now passes through Capertee, making it a busy place. The station lies on the border of the extensive mining area embracing Gulgong, Mudgee, Cudgegong, Windeyer, Hargraves, Sofala, &c., and goods are received for these places. In other parts agriculture is carried on, and there is also forwarded from Capertee a considerable amount of pastoral produce and live stock. The extension to Mudgee is being pushed forward with all speed, and the opening is to take place on the 30th June 1884. With the extension of the line beyond Capertee this station will lose much of its present importance. Between Wallerawang and Capertee are some extensive lime quarries, and in the district splendid seams of coal exist, which however are not at present worked. Capertee contains three hotels.
Posted by Silas at 02:00 No comments:

Welcome to Capertee Hertiage, a site that highlights the diverse charms of the district be they built, cultural or natural. So whether you're a naturalist, bush-walker, train-spotter, artist or historian I hope you will be inspired by what you read and see.
Silas 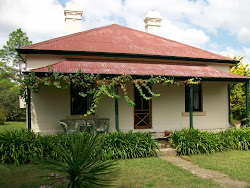 Capertee Heritage is keen to display art related to the Capertee district. So whether you are photographer, painter, writer or poet please make contact so we can arrange a post about your work. E-mail contact details are listed at the foot of this page.

'The Story of Capertee' by Bruce Jefferys 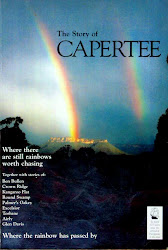 Capertee HERITAGE is a proud supporter of the National Trust